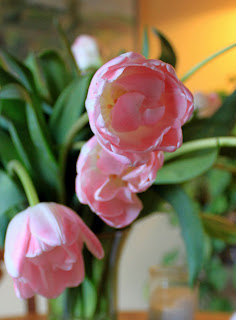 Spring is one of my favorite times of year (the other being Fall, when the weather turns cool & the colors change), with it warmer temps & showers interspersed with snow.
I love that the grass gets greener & the trees start to show signs of life again - especially the cherry blossom trees!
But mostly I love the return of all the tulips!
Our good friend Tim brought me these beautiful tulips last weekend & they are still holding strong in our front room!
I love seeing them every morning when I open the shade to let the light in.
I love that they start off all closed, standing upright & slowly open up & begin to flop over.
They just make me happy! 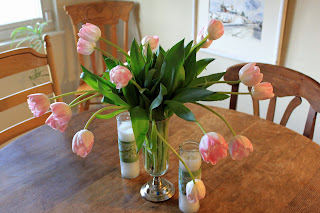 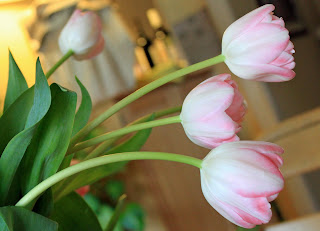 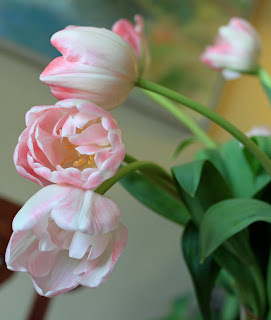 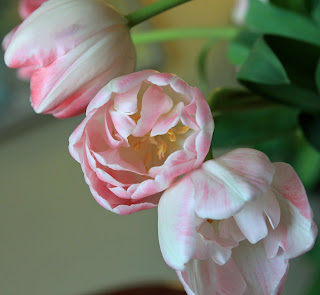 Happy Spring to Everyone!
Posted by Becky Voth at 11:11 AM No comments:

Gotta Get My Hands On THESE!!! 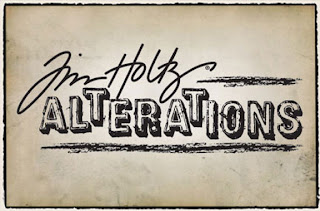 Tim Holtz is truly an amazing artist (not to mention, ADORABLE!)!
He just released a series of videos on his blog to introduce all the great Sizzix dies he's designed for his new Alterations line with them...http://timholtz.typepad.com/my_weblog/2010/04/all-about-alterations.html
I got a bunch of his stamps for my birthday & now I've got to get my hands on some of these dies! I have to admit that I have picked them up several times at the store, but then I talk myself out of them because I wasn't sure what I'd be using them for. Now I can SEE the possibilities!!
He manages to cut through so many materials - even thick craft foam & made a foam stamp from it! He also used the Tattered Flowers Die to make a really cool layered fabric flower that would be awesome in an album or to wear!! (I tried to copy the image from the video(s), but it didn't work, so be sure to check it out when you have a sec on his blog or You Tube!)
The other day he wrote a little something about some of the new products that were introduced at CHA that look like a lot of fun to work with as well... 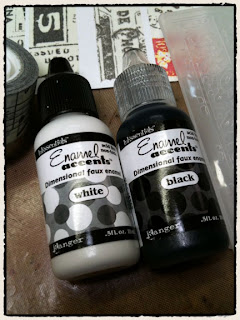 Glossy Enamel Accents!
Very cool way to add dimension to your pages!
I can't wait to try some on what is my most anticipated release from him... 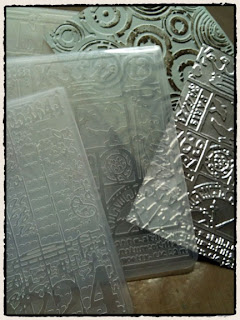 The Texture Fades!!!!
Yes, they're embossing folders, but SOOOOO much better!
They are deeply etched in some places & fade out in others for that altered/aged look. AND, they are deep enough to really give great impressions on thicker materials, like chipboard & METAL (he shows these in one of his videos too)! Another great thing he thought of with these - they go ALL THE WAY TO THE EDGE of your paper! No more funny line where the pattern stops! I Can't Wait!!!! That BINGO card needs to live in my studio!!!
If you're a fan of the 7 Gypsies fabric-like Gaffer tapes, you'll probably want to play with Tim's new Tissue Tapes too! They are thinner, so the uses might be totally different, but, OH the possibilities... 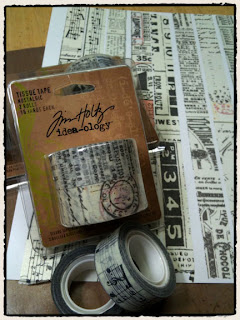 FYI- For those of you that live near an Archiver's, they are having a Tim Holtz Demo weekend April 16th-18th & I know I will be there right when they open on the 16th!! I have been wanting to get my hands on some of this for weeks, but have been holding out until I know that they have more of it in stock at the store! (BTW, some of the above products may not be in by the demo weekend, since there were production delays.)
His never-ending creativity is so inspiring! It makes me want to throw out my to-do list, be irresponsible & just play all day!
Anybody up for that?!!!
LOL!
Posted by Becky Voth at 9:44 AM No comments: 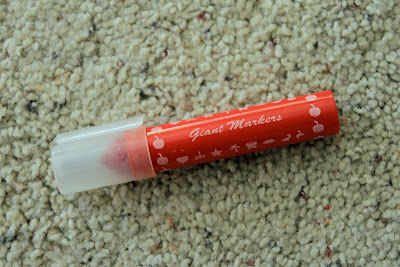 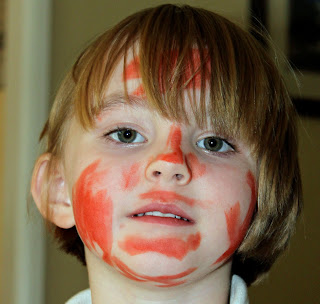 This was the first glimpse I got of Maggie as she came out of her room after her nap on the day we played in the snow. At first, I thought it was only her face...

but NOOOOOOOOOOOOO! How silly of me!
She started with her feet & worked her way up! 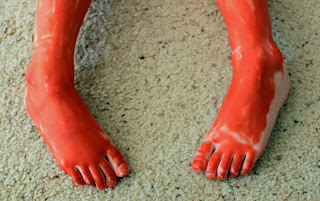 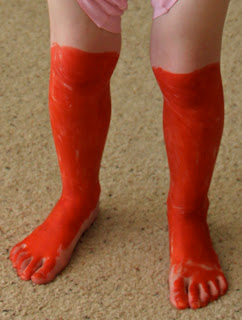 Look at those nice straight lines that her pants allowed her to follow just above her knees! 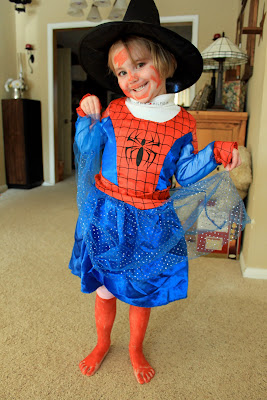 After a good laugh, the picts & wanting to put on a costume, I was told the reasoning behind it all...
"Because I couldn't sleep!"
The bath later that night wasn't so fun! We drained the hot water heater to get our little "artist" from red to pink again!!
KIDS!
Gotta love 'em!
Posted by Becky Voth at 12:02 PM No comments: 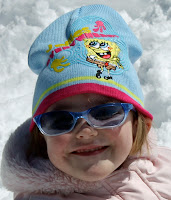 Right after St. Patrick's Day, we got a ton of snow, so of course, we have to go play!

There's just something about a little kid in their snow-gear sitting in the snow that makes me smile. They seem so small all bundled up like the Michelin Man, barely able to put their arms down at their sides! and nothing beats plopping down into the snow to make a few snow angels - although Maggie hates it when the snow goes down her neck, so she won't always bless us with an angel! But really, her favorite thing to do when it's snowed like this? EAT SNOW!  Every time I turned around, she had a mound of snow in her hands pressed up to her face! And later that day, she would run outside to fill a container with snow to eat while we watched a movie! At one point, I was in my studio working, and she brought me some snow soup, aptly decorated with the cupcake sprinkles she found in the cupboard! She's a resourceful little girl! (I found sprinkles for days after that all over the house in little piles!!)

It was great snow for building a snowman, but we just didn't have the energy for a very big or defined man! So, this is Maggie putting the finishing touches on our little guy & giving him a great big hug!