Hello & welcome to the Creative Cuts & More
Autumn Blog Hop!
It's that time of year!
Hope you're ready for some great ideas for the big Holiday rush & to get a jump start on all those
holiday cards, wall decor, centerpieces, gift wrap, &
more with us!
We've created a plethora of ideas for you with some amazing dies from Creative Cuts & More! So, grab your coffee, a note pad & get ready to jump in!
Hopefully you started at the beginning & hopped along from Chris' blog to get here (I just love her projects!!).  If not, you really don't want to miss what all these designers have done for you today! So start HERE & hop your way back to me!
Today, I am sharing the Tall Gable Box with you all!
It measures approx. 3 3/4 x 5 3/4 x 1 7/8 & is the perfect little treat box to fill with all your handmade treats this Holiday Season!
I ordered the box in the "Sapphire" Stardream Metallic Cardstock & assembled it with only ONE strip of Killer Red Tacky Tape along the back - the bottom of the box just folds into itself!
I used three of the four Christmas Ornaments in a Smooth Bazzill, "Almond Cream" as gift tags with various embossed stamping on 2 of them & tied them on with some red & white Baker's Twine.
The Trees I ordered in a Bazzill Canvas, the front one in "Leapfrog" & the other in "Ivy," attached to another tree ordered in chipboard for dimension. I then ran them through my Cuttle Bug with the Swiss Dot embossing folder & embossed them with white ink & powder to give them some SNOW! I adhered them with more Killer Red Tacky Tape. For the Moose, I just couldn't resist ordering one in a brown felt (I attached him to the second one I ordered in chipboard too)! Don't ya love him! (Creative Cuts & More has tons of dies that can be used for your holiday creations! You gotta check it out!!)Then I popped him onto the box with foam squares!
I can't wait to fill this with some Homemade Fudge or Truffles (YUMMY!!!) this year & give it to Maggie's teacher!
That's it for me today!
Now it's time to hop on over to Kim's blog to see what exciting creations she has in store! It's always something great!!!
TTFN,
BECKY
Posted by Becky Voth at 6:00 AM 13 comments:

Climb Every Mountain? Maybe Just THIS One!

All summer long Nick has had the 14'er bug! Up until yesterday, he has climbed 9 of the 50+ 14ft mountains in Colorado & has been asking me to join him. It's not that I didn't want to hike with him, it's that I have terrible knees & am not in the best shape. I can handle the climb up - other than being outta shape, it's not that difficult. But it's the hike back down that absolutely kills my knees!

But I finally relented! I agreed to climb Mt. Sherman with Nick yesterday. According to his list of mountains ranked by other hikers, Sherman is the easiest & least technical to climb. So, that's the one he picked for my FIRST 14'er.

So, here are the pics from my iPhone. 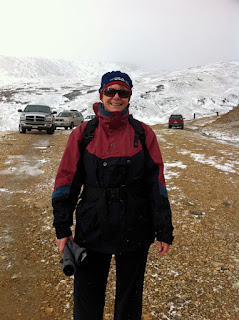 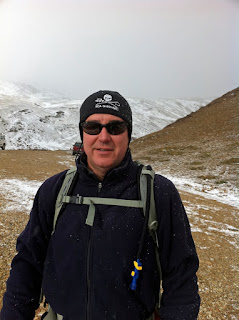 The weather was not ideal, but we were prepared! I had on 4 layers when we started; added Nick's Gortex coat at halfway. Nick had on 4 the whole time. We only saw about a dozen others on the mountain. Even with all the snow & cloud cover, it was a beautiful day, with the sun peeking in & out of the clouds. We "enjoyed" a hot lunch at the top, courtesy of Nick's stash of MRE's, we ate like soldiers hunkered down in the snow in a makeshift wind break! It took us 3 1/2 hours up & 2 back down. There were times when I wasn't sure I was gonna make it - getting close to hitting the wall a couple of times - but Nick would throw me some food & my energy would rally. It was hard, but very much worth it. Thanks to my hubby for believing I could do it! And, I'm glad I could be there when he bagged his 10th for the year! 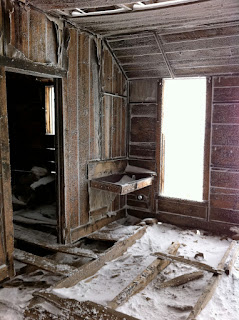 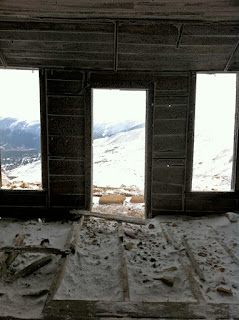 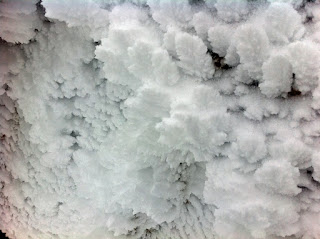 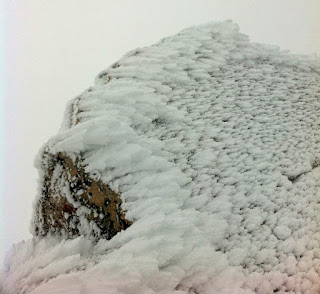 Here we are at the top! It sure felt good to get up there, but we were disappointed that the sun didn't make an appearance for us to catch a glimpse of the vistas around us!


Today, I woke up feeling tired & sore from the knees down! I pretty much have been hanging out on the couch all day, but I am starting to feel a little more human again now. Hopefully I will be feeling well enough to run a little tomorrow (I am working my way through the Couch to 5K training program).  Not sure I will join Nick on any more climbs this fall, but maybe next year I'll slowly work my way up the list with him!